Just been to see Volver (the new Almodòvar) - excellent. Beautifully filmed. Go and see it if you get the chance.

Ball Toucher - it's a gaem, and it's OK even if it has a rotten name.

I'm confused if the Force is a tool of Satan how can Jesus be the Force? Jesus appears to be Willy Nelson too.

iTunes 7 is definitely broken in lots of ways, but I think it is much faster than 6 which is a bonus. The new UI is OK to.

My old desktop speakers started to hum horribly so I got some new ones - they sound really nice. Cheap too.

Clarinets - $4,400 sounds cheap to me for an instrument of that quality.

Anyone else installed iTunes 7 and found that shuffle doesn't seem to work like it used to?

I do like the album art browser in iTunes 7 - I just wish I had more of the album art available! If someone would write an emusic scraper that would be good.

Pretty but I have no idea what is going on.

Verybigindeedery (I'm pretty sure I've linked to this before, but not at this size)

The current issue of .NET magazine describes this locale as "Lots of links, minimal commentary...an old school delight". Mind you it only made it into the "20 more brilliant Britblogs" rather into "the top 50 Britblogs", but it was first in the list, which wasn't quite alphabetical. :-)

If you have stored any links to particular items in this continuing opus, then I have probably broken them all by becoming more standards compliant. I'll see if I can retrofit the old style references though.

Hmmmm - you really can find anything on the intrawebs

Lots of good stuff (via Honey)

How to sabotage yourself

the church of google (via Chapel Perilous as was the previous)

We are having our living rooms decorated this week and have had to move all the stuff out into the rest of the house. It now looks like one of those places that mad ebayers live - books all the way up the stairs, boxes with random things in them etc. etc.

Essential if you are into security

I have been looking for something like this for ages 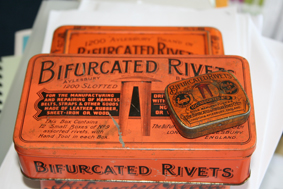 Yes, I know this was on Boing Boing, but it is funny. I am astonished at how long it takes the audience to pick up on the fact that he is reciting Nigerian spam.

History buff (no, not a history of nudism)

Pictures that lie (useful for one of my lectures)

I'm watching ITV Play. Good grief what a load of rubbish. 75p a call too.

I'm not sure how useful this is

I discovered that St. Valentine was in a box in Dublin so I popped in to see it. Not a very Interesting box it turned out.

the sound of lincoln

I also looked for Greg Ahting who also features prominently in pill spam subject lines but Google has no knowledge of him. The Ahting/Langan Quintet\or the Greg Ahting Big Band. Maybe Thomas Langan and his Polka Masters

Thomas Langan - the question is, is this the Thomas Langan that is referred to in the subject lines of all the pill spam I get?

hah( I was on Ryanair this morning )

free wifi in the hotel - Yay! - I'm in Temple Bar, lot's of bars and restaurants and things.Some good buskers too -heard a lovely version ofI Blackberry Blossom. Had a nice Mexican meal too.

I'm in Dublin all next week and I don't know if I'll have any connectivity so there may be an interruption in the usual service. But of course, don't touch thst dial.

Hah - anyone tried it?

Not as good as the sand and fire

Air conditioning problem in the machine room - catless may go by bye suddenly....

Are we surprised that Cory is not much of a drinker?

I was trying to buy some black beans in Newcastle for a friend and couldn't find anywhere that sold them. (Equally, I doubt I could buy grits anywhere either)

The whole university was evacuated on a bomb scare this morning.

I was shopping in Tescos the other day and I was horrified by the transpondification of the milk section. When I were a lad, there was milk. In bottles. With silver foil tops. The rich folk ont' hill might have had gold top but not for likes of us. But now not only is there skimmed, semiskimmed and ordinary, you can perm in organic, probiotic and even filtered. What the hell is filtered milk? How is it different? And then there is Night Milk, various super creamy forms and just other random stuff. Interestingly homogenised milk no longer seems to exist.

Used FAQs - yes it was on BoingBoing but it is far too good not to link to.

Who on earth is Barney Fife??

But why should I trust them???

Funimag - a webzine about funiculars

Elephants dream - is it any good?

Hah (I am not usually a great fan of RA)

Ugh. I'm feeling awful today - been asleep most of it.

New Model of the Universe

Jesus seen on subway (via Signs of Witness)

I've pruned the number of RSS feeds I subscribe to down to 70 now. I probably need to look for some fresh new ones.

Bunpoumon (it's not as elementary as it suggests....)

Montezumas - I think all these chocolatiers ought to send me free samples.

From the depths of the comments : The Meccano webring

I had one of the Macadamia & Ginger ones when on holiday - very good. No idea where I could get them here though (pricey too)

Not my cup of tea

I wonder how well this will work. Quite Well in fact.I'm Using - evernote's ritePen which lets me just write an the screen anywhere. A much better idea than the default mechanism. It's recognizer is good

The Newton was much easier to use. I wish apple would make a tablet

I'm writing this on the tablet

I have never understood the Internet's obsession with Lego. Now Meccano, that I could understand.

Folksongs of the far rightwing

Ginseng Sullivan - Lyrics A, Lyrics B, Lyrics C. SOme trouble with the first two lines....

Nice Fantastic (but why describe this guy as a hippy? He's got a beard that's all)

Mmmm, strawberries, raspberries and blueberries. Sprinkled with a little Licor 43 and then a dod of crème fraiche

'We pray over the gritters in the winter and the casualty reduction rate has plummeted, it really has.' *sigh*

Spotted in an article about Kiko : "It looks like they just weren’t able to monetize their free consumer subscriptions and never actualized the enterprise solution they sought". English 2.0

The Superficial Friends (via snarky)

Neat (via TV in Japan)

Definitely not how to make pancakes - the guy hasn't a clue about making batter. Electric whisk? Add the flour to pre-mixed egg and milk? Ridiculous.

I got a tablet PC today for some teaching research we are going to do. It's interesting. I need to learn how to use it effectively though.

Plants for a future

Stalker's dream - it even has a google map's link. (Looking at your roof Ole)

I never thought about it before, but people with piercings are topologically different from people with no piercings.

George Washingmachine -check out the samples, some very fine playing

I am getting very sick indeed of spammers calling my mobile and trying to sell me upgrades to a contract that I don't actually have. Even if I had the contract I would be hacked off. There does not seem to be anyway of stoppping them doing it either.

Sitting in a call centre today handling clearing calls for admissions. Or at least waiting for calls that aren't happening at the moment. Noisy.

50 Worst band names (via Thumbrella) - I agree with Gary, many of these are not that bad

*sigh* e-music has launched an e-music UK. I really don't want that. I bet they are going to fiddle with what's available.

As you can see the trackbacks have gone. What do people feel about JW's idea of things to click to add links to del.icio.us etc.? (Blinklist is my preferred system)

I am thinking about removing the trackback feature - there has been almost no non-spam use of it and it would unclutter things. Of course it would mean that this was no longer a whizzo cutting edge weblog (oh, hang on, I don't have tags so it isn't anyway) Speak now or forever hold your peace.

I have no idea

Kampai (via TV in Japan)

My friend Paola's new website. The jewellery she makes and sells is good.

I've done the shoelacing site a long time ago, but Len reminded me of it, and I still can't quite get over the pages of lacing photographs

SOom good ideas, but most people are simply too lazy to tag things accurately or indeed at all. I know I am. I have a way of tagging all these links and have used it about twice - a) it's just a hassle to have to do it and b) thinking up the tags is hard.

The missing london link from earlier....

Early colour image of London - I am surprised that nobody seems to be wearing a hat. Also note the guy just above the bonnet of the left hand car who appears to be picking the pocket of the guy in front - it *might* be the way he is standing, but it certainly looks odd

How LOTR should have ended

Ah, Chappie doing Derikashii No kakera - excellent. I wish I knew what it all meant though.

Listening to Tal Farlow playing Jordu - just wonderful. It swings so hard and just flows along.

An iTunes store-alike for traditional music - tons of good stuff available too. I can recommend Sandy Brechin for a start.

I want one of these

Are you a freak?

Hmmm - when we were away I noticed in walking by caravans that people who had televisions just sat in front of them like zombies with their mouths slightly open. Some people in tents even had TVs for goodness sake. We read or played cards or scrabble - the youngsters played 6 handed games of cheat and shithead for ages and ages.

Yet another nicely done trick

Nice Sadowitz trick - the man's skill with a deck is astounding.

Star Wars on God's own instrument

Hah (may offend the easily offended)

Great riding, but utterly ridiculous over-reaction from everyone involved.

I need to practice this

I don't believe it

Oh and before whoever it was has a go at me for having a go at Xtians again, do let me point out that I would gladly feature nutters of other persuasions (the rapture is becoming pretty old hat and boring now), but their websites tend to be in languages I don't speak or read - there are lots of really wacky cults in Japan (some of them Xtian too!) but linking to them would be a bit pointless.

Went to the Eden Project again this year : lots of growth since the last time (obviously) and it was good. As always the evangelicals were on the campsite, but this year featuring a gospel illusionist! (for my next trick I need two loaves, three fishes and 5000 volunteers). As always they were leading small children in entirely inappropriate chanting, had illiterate and illogical notices, and, as always, set up on the beach for a "road show" with loudspeakers annoying everyone. There was also a superfluity of toffs beingsupercilious and a vast group of realted londoners being londoners.

Advice for the young bride